Discover all the foul facts about the Middle Ages including all the guts and gore when reading Horrible Histories Measly Middle Ages. 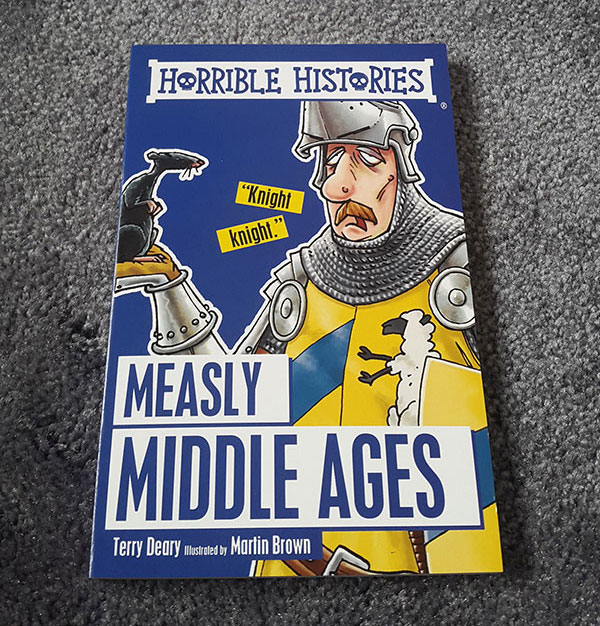 The Middle Ages but Not as We Know It!

Horrible Histories has a formidable reputation when it comes to honestly covering history as it was with no sugar coating or skipping over the bad bits. From the invasion of the Vikings through to Christopher Columbus there is plenty of gruesome detail to get your teeth into. The Nasty Normans and the feudal system is covered in detail along with the peasant’s revolt and gruesome facts such as heads on poles. Disappointingly the leader of the peasant’s revolt was killed by the king’s men, so the revolt was quashed and his head ended up on the end of a lance!

A Horrid Time to Be Ill! 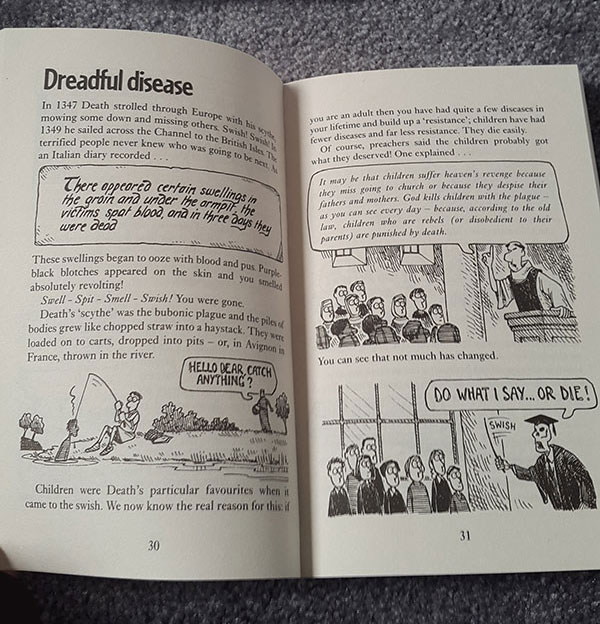 Illness was rife in the Middle Ages and Horrid Histories doesn’t shy away from the terrible symptoms of the Plague! Our youngster was concerned that we wouldn’t be coming down with the plague anytime soon and once he was reassured we wouldn’t be he basked in the gory details of just how badly people suffered. Swellings in the armpits and groin area, fever, spitting blood and then dead within three days!

The remedies were almost as bad as the diseases of the Middle Ages too! Gruesome facts about how sufferers were advised to wear a dead magpie’s beak around their neck to cure toothache or cut a hole in the skull to let the devil out was a cure for mental illness. There are some hilarious facts about where people back then thought the plague originated with different countries having different ideas.

Kids will learn all about the kings and queens that ruled during the Middle Ages as well as finding out about the food we ate. This section brought on plenty of “yuks” and cries of “disgusting” from the kids as they read foul facts about eating beavers, hot sheep’s feet, slimy cabbage and thrush on a stick! Yes, you heard it right people could buy two hot thrushes on sticks to eat for one penny!

We had the usual toilet humour too. Why is it that kids love to read the gory details about the filthy toilet habits of people? Toilets were nothing but a hole in a piece of wood where people sat did their thing and where did the poo end up? In the street below and if you were unlucky enough to be walking under at the time you could end up covered in it! The kids thought this was hilarious!

Women did most of the cleaning in the Middle Ages and the church even preached that men were better than women. Men could beat their wives and peasant women had a very hard life indeed. The book also covers schooling, religion and beliefs, while there are quizzes and games to play to.

Horrible Histories Measly Middle Ages is a riveting read that the kids really enjoyed. The Horrible Histories books are packed full of fun facts, gruesome detail and plenty of information that even we adults were not aware of. It’s all presented in a way that doesn’t offend, in fact some parts are very funny! If you would like to know why chickens had their bottoms shaved, facts about crazy cures or nutty kings who ruled back then make sure you get your hands on a copy of Measly Middle Ages.