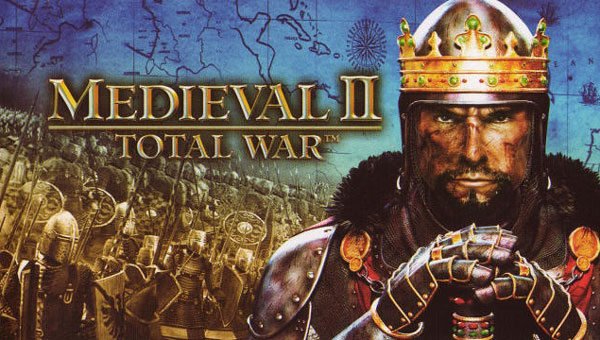 What is it good for? Absolutely everything in the gaming world, hence the overabundance of wartime strategy games that exist to entertain the millions upon millions of fans of said genre. So war is good for entertainment it turns out, provided it’s not too close to the knuckle or indeed too close to the not-so-distant past. Thankfully, Medieval II: Total War is as aloof from the present as the original, taking us back to times where religious divides fed conflict on a global scale (getting echoes of the present here, but that’s another article altogether) – and immersing us yet again in the series’ brand of clever real-time strategy and gritty, intuitive battle that appears to be evolving in the right direction.

There’s no time to dawdle when beginning Medieval II; there are many nations’ fates at stake here after all. Your selection of which nation to lead to victory or defeat (defeat being the eventuality that you want to avoid if possible) is made is met with ample choice: France, England, Spain, Denmark, Venice, and the Holy Roman Empire are all up for grabs, though you can choose the reins of only one of these great nations of history. Want more choice for your money? You’ll have to tough your way through a campaign that can last anywhere between 40 and 60 strategy-filled hours (the former if you’re brilliant and the latter if you’re shall we say, meticulous), after which more factions become available.

Both new players and veterans alike will be thrilled and re-pleased respectively at the variations afforded to you between each nation. These variations range from your starting position to the range of units that you will have at your disposal. Each nation also represents a different set of strategic obstacles that go beyond starting position and units as well. The razor-sharp sword of England’s geographic location, for example, is a double-edged sword. On the one hand you’re only contending with the Scots in the immediate sense, but your hold on a global scale is miniscule, a disadvantage that must be balanced out with fairly rapid expansion because if you don’t you will soon fall prey to the tactics of the game’s other nations.

Fancy being French for a few hundred years? Well you’ll be pleased to hear that in spite of being chronic surrenderers in the making you will have some damn fine cavalry available to you. Likewise the Holy Roman Empire looks like a handsome nation whose power you’d be happy to wield, but its substantial quantity of land is offset in a strategic sense by the many borders it shares with enemies just itching to take a big wet bite out of this succulent-looking empire.

A Look That Could Kill (Your Graphics Card), Controls that (Occasionally) Frustrate

One of the main improvements that is immediately obvious as soon as you commence your campaign is the visual aspect of the game. Its graphics have improved substantially, making its predecessor Medieval Total War (link is for a forum discussion for those that enjoy reminiscing about the past while owning a past-based sequel to a game that’s also about the.. past) look like a mere low-resolution shadow of its successor. The detail is simply incredible, from knights rolling over hills on horseback to the cities of your civilization bustling dynamically as smoke rises from them and the people go about their business. The generic clone-based armies of Rome now have more detail, right down to the individual soldier. Weather? It happens, and it can affect your battles substantially.

It isn’t all glory and epic-ness however. Some things are quite annoying such as the fact that the battles themselves, which are fought essentially in real time, still feel a little similar to those in Rome: Total War. Also, those control-based annoyances that plagued said predecessor? They haven’t been taken care of as much as one would have hoped, with units often doing the opposite of what you’ve instructed them to.

Still, these annoyances are balanced with positive aspects like the aforementioned detail in the aesthetics and battles themselves, as well as things like the revamping of the strategic map in order to give you the choice of building either a city or a castle, with each possessing drawbacks and advantages to your position. It’s also pretty fun that the Pope has such an influence in the game that also reflects his real-life powers at the time. Being called upon to fight in a crusade is one of the many ways the Pope can interject, and it’s damn fun to revel in this level of detail and realism, even if it does upset your plans.

While the battles are fraught with a few bugs here and there and aren’t really all that different from those of Rome: Total War, Medieval II: Total War remains a triumph both in terms of its visuals and its gameplay. You can sink hundreds of hours into this game, though there’s not enough broad appeal here to make people that aren’t a fan of the genre consider doing do. This game simply feels like the The Creative Assembly‘s last logical step in the Medieval: Total War journey, and one that can only be surpassed by shaking things up in a more substantial way.