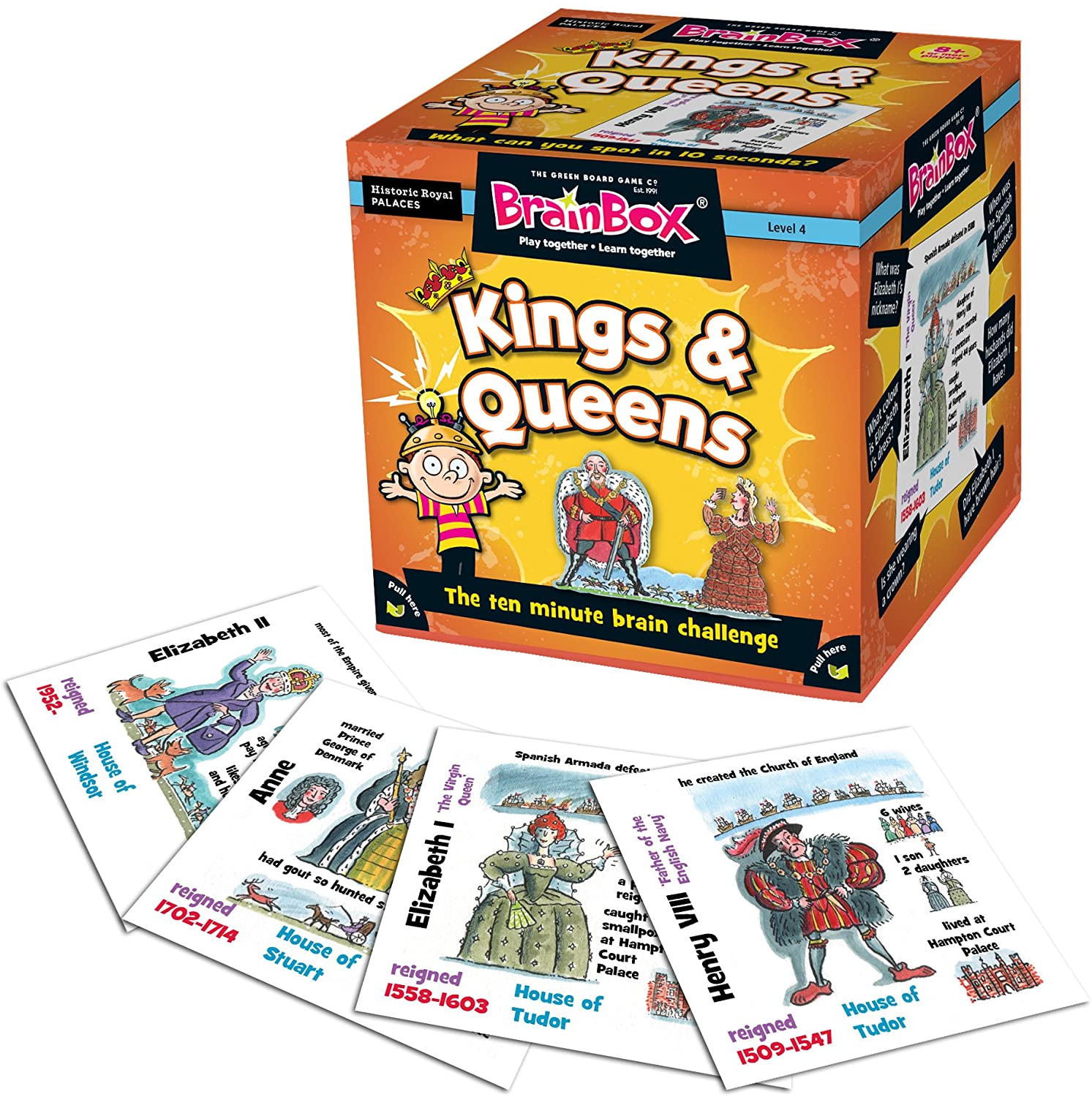 How much information do you think you could retain visually with only ten seconds to complete the challenge? How many correct answers do you think you will achieve? Play the Kings and Queens Memory Game to find out the answer!

Fun for All the Family in One Unique Little Box

How much do you know about the kings and queens that have ruled us over the centuries? This fabulous memory game from Brainbox features fun facts and gory details regarding monarchs and rulers from 1066 onwards written and illustrated in typical Horrible Histories fashion. The game is aimed at children aged eight years and over, although our son aged seven played along with us really well therefore it depends on the individual child really. Adults and children alike can play, making this a great game for all the family, groups of players or simply a lone player, while with only ten minutes allocated per game it’s a fast and furious challenge that will please those who don’t want to play the game for hours on end!

Game Contents and How to Play

The neatly packaged box contains fifty-six detailed cards featuring eight questions on one side of the card and visual images along with interesting written facts on the other, a dice and a sand timer. The aim of the game is to win as many cards as you possibly can in ten minutes with the player owning the most cards declared the winner! To begin, the first player takes a card in order to study what they see and read, while another player turns over the ten second timer. Once the sand has passed through the timer he calls stop and the player must pass the card over to the other person.

The player then throws the dice and whichever number the dice lands on is the question number the questioner will select to ask the player. A typical question you may be asked is “where did William I die?” or “is William I wearing a crown in the picture?” If the player answers correctly, then they keep the card and play passes to the next person. Younger players may decide they need more time to consider the card therefore turning the timer twice to give the younger player twenty seconds is an option. Our younger player definitely benefitted from the extra turn of the timer. Try not to concentrate too much on text rather than the image as we found concentrating on one more than the other meant failing to answer the question.

A good tip for players is to scan the card taking in key points as we found we answered more questions correctly by doing so. It sounds pretty easy doesn’t it? Well its surprising how quickly ten seconds goes but we found the Kings and Queens version of the game a little easier to play than other games in the series. The cards seemed a little less crammed with information making it easier to take in the detail in the ten seconds allowed, while we all actually won more cards when playing Kings and Queens Memory Game.

With fabulous illustrations, created in the usual Horrible Histories tradition kids will recognise, the cards are easy on the eye and caused a giggle or two in our home. A good example is the Queen Elizabeth II card. We have all seen her majesty on TV on many occasions but she has never looked like this! On the card the queen is giving us a very un-regal but friendly wave while hanging on to two cute corgi dogs and balancing a tilted crown on her head! Another king who looks very different from official portraits is Henry II who was known for his strength and agility. On this card the king appears to be playing leap frog over a chair sporting a huge grin! The quality of the games contents is superb with the cards being constructed from durable cardboard that will certainly stand the wear and tear applied when playing the game over and over making Kings & Queens Memory Game one that will be a family favourite for years to come.

If you want a fun filled game that’s both educational and great for all the family to play, then you should definitely buy the Kings and Queens Memory Game. Your observational and memory skills will certainly benefit from playing, while your historical knowledge regarding royal rulers over the ages will too! It’s great for younger kids to be able to play along with parents and older siblings (mostly in our child’s case on virtually the same level) when it came to remembering what was displayed in the images.

Many parents prefer to purchase games that have an educational side to them, while in this parents’ case even though I consider myself quite the history buff I learned a lot too! The Kings and Queens covered in this game include Henry VIII, William I and II, Mary I, Charles I and many more. In fact, by the time you have played the game a few times you will know many amazing facts about our Royal predecessors. Future monarchs are also included in the game including Prince Charles the current Prince of Wales, his son Prince William and his grandson Prince George.