Though some adults may shudder at the thought of buying toys for their children, the internet has certainly made toy shopping a whole lot easier than it used to be. Gone are the days of queuing up for fifteen hours outside your nearest large toy store just for a chance to purchase the latest Power Rangers action figure or the most popular new toy-based trend that’s making kids go crazy that week. You can now allow the internet to do the leg work for you, getting toys delivered straight to your door. We’ve gone one step further and taken the leg work out of deciding which are the best castle toys out there for children. You’ll find a decent selection of the very best castle toys we could find below, including offerings from Lego and Playmobil, and there’s even a Harry Potter set among the choices.

There’s no avoiding it: Lego is massively popular with children and adults alike, and this means it’s also big business for the Lego Group as well as the outlets that stock the company’s massive range of products. Though Lego sets may be expensive, they can provide days and days of fun for children and can allow parents to know that their little ones are playing with a toy that keeps the mind active and allows creativity to flourish. 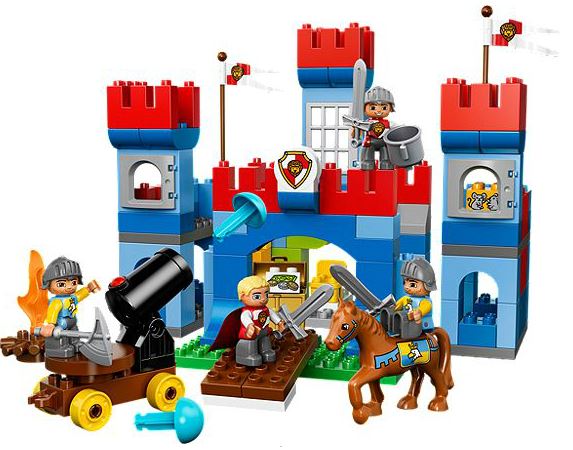 The Big Royal Castle is probably one of the most relevant sets for inclusion in this list, it’s everything you want in a toy set if your child happens to be a fan of castles. The Big Royal Castle is a Duplo by Lego set, meaning the blocks are larger than traditional Lego and are therefore easier to construct and pose less of a choking hazard. The set includes the building blocks required to construct the fantastic castle, complete with drawbridge, hidden treasure, and 4 additional Duplo figures: 3 knights and the King. There are accessories that come with the castle including a horse, a cannon, axe, treasure, fire piece, and coins.

The Big Royal Castle may look simple from an adult’s perspective but in the eyes of a child it is the opportunity to embark upon a castle-building adventure that has many possibilities. This can be used as an educational tool for parents to teach their children about the place of knights and castles in history. Purchase Lego Big Royal Castle from the official Lego site. 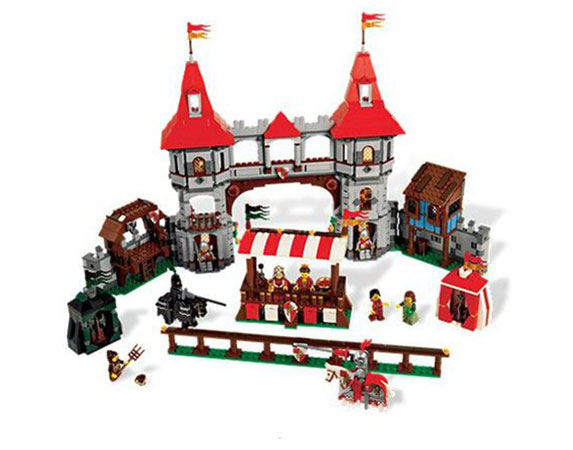 One of the more comprehensive Lego sets in this list is Lego Kingdoms Joust, a magnificent set that allows children to play out their own medieval jousting adventures with the numerous figurines that are included with the set. The set consists of a large castle that contains six rooms as well as a myriad of accessories and two additional knight’s tents. There are nine figurines included with the set including the king, queen, princess, two knights, two soldiers, a nobleman and a young squire. The set really does contain everything a child need to construct a multitude of medieval jousting scenarios – all that’s needed in addition is imagination! 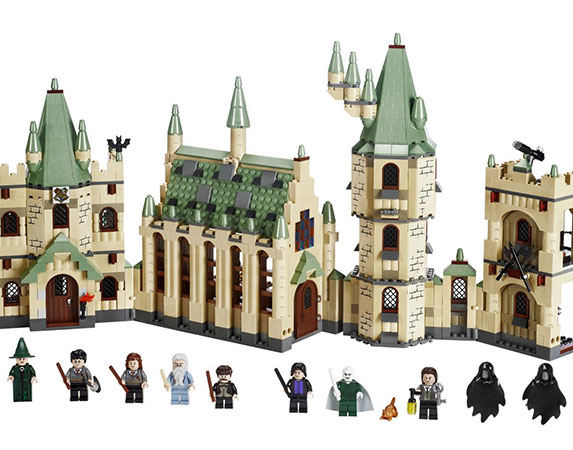 This kind of set really needs no introduction if you’re describing it to your child – just say the words “Harry Potter” and they will almost certainly be sold on the idea. In case they aren’t immediately excited to a ridiculous degree however, explain to them that this set, which is appropriate for ages 8-14, allows them to build their very own Hogwarts Castle and comes with a nice variety of accessories that allow them to create pretty much any scenario they would like.

The set includes a many of the main characters including Hermione Granger, Voldemort (He who must not be named), Professors Dumbledore, Snape, McGonagall and Flitwick, Filch and his cat (Mrs. Norris), and two dementors.

The set is remarkably detailed as it includes individual rooms. Dumbledore’s office comes complete with famous items like the sorting hat, Gryffindor’s sword, and a basilisk fang. The Gryffindor common room has a fireplace sporting Sirius Black’s face and you also get the Great Hall, Astronomy Tower, the library’s restricted section, and the astronomy tower with vanishing cabinet.

You can find The Lego Harry Potter Howarts Castle on the official Lego website.

It might not be Lego, but Playmobil have been making quality children’s toys for years and offer a great selection of toys. The most relevant of the Playmobil sets are the: 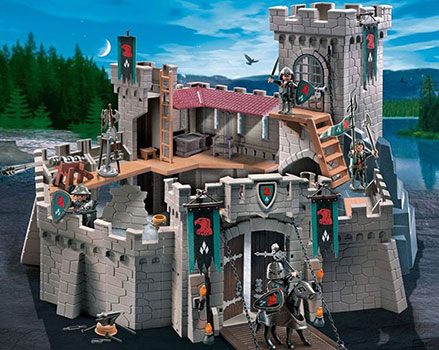 The Falcon Knight’s Castle set is of substantial size, measuring in at 60cm in width and 35cm in height and actually has a functional drawbridge, which is more than the Lego Big Royal Castle can say for itself. Moreover, this set comes with a cannon that actually fires, making it much more functional and to many a much more interesting set to own. The castle has a lockable jail cell, a collapsible wall, multiple weapons/armour, and four falcon knights.

This set is aimed at children aged 4 and above and has the advantage of being compatible with a number of separate accessories including a Multi-Firing Crossbow and Falcon Knight’s Battering Ram. The castle and accessories can be all be purchased at Playmobil. 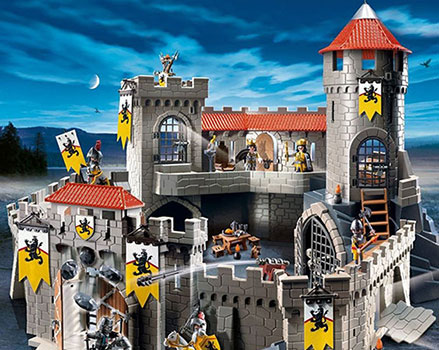 This set is even larger than the Falcon Knight’s Castle, measuring in a 72cm wide and 62cm tall. This castle is the clear choice when it comes to sheer detail and working parts, and though isn’t as suitable for audiences younger than 4, it’s certainly more accessible and dynamic for younger children than computer-based castle games.

Giving this castle the advantage of that of the Falcon Knight’s one is the rock-fall trap that lays at the castle’s entrance, allowing for children to sabotage potential aggressors with the swipe of a finger. In addition to the trap the tower also has a working lift, a trap door positioned in the turret, and a false wall that can instantly eject potential aggressors from within the tower. The set also comes complete with a 3 full-armoured knights, a king, a queen, and also an evil knight complete with cannon.