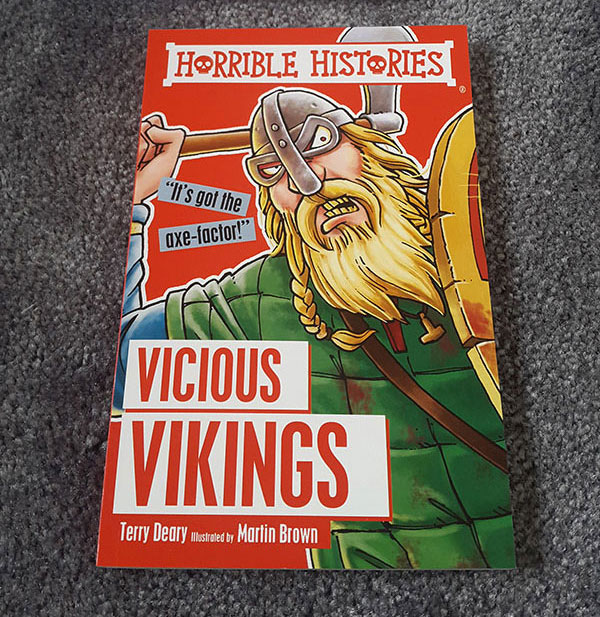 Discover all the foul facts about the Vicious Vikings the truth and nothing but the truth with all the gory details left in!

We are eased in to the book gently at first with amusing adverts as to why a young Viking would want to sign up for the adventure of invading Britain. Another amusing section is the Think Like a Viking chapter where Viking poems and sayings make a lot of sense. For instance, “Do not laugh at the old and grey, there may be wise things they have to say”. Then we continue to learn about Viking Gods and myths such as tales of dwarves and elves or of evil giants.

Sacking and plundering was second nature to the Vikings who were a vicious lot. When we said, we were going to read all about the Vikings in our new Horrible Histories book the children were very enthusiastic. They anticipated plenty of blood and guts in the story telling and they were right! Horrible Histories’ reputation is well known for not shying away from the gore of history and this title is no exception. Take for example King Edmund who was beaten, tied to a tree, shot with arrows, cut down, cut up, beheaded and his head and body thrown into the wood! Wow! What a way to go! 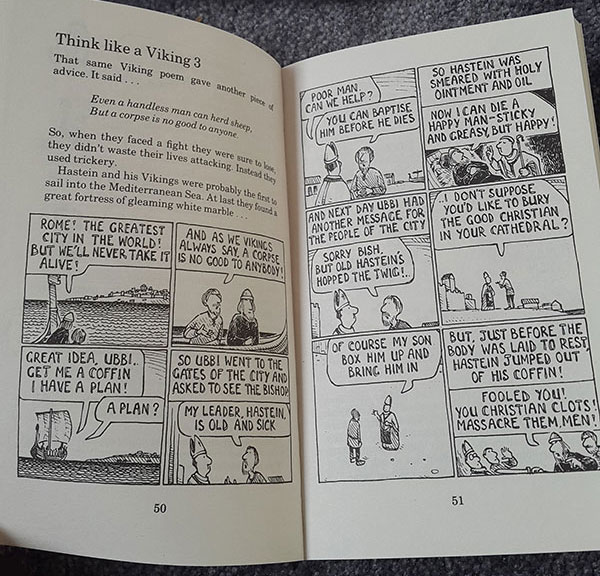 This section was particularly interesting as we tend to only think about violence when it comes to the Vikings although there was however plenty of fighting and feuding among families too. Viking men dressed sensibly and only wore helmets when going into battle. At home, they would wear hoods or fur hats. Our seven-year-old preferred to think of the Viking warrior in his horned helmet rather than when wearing his daytime attire which he found a bit disappointing! Then again reality often is!

We girls were proud of the Viking women as they kept their farms going while the men were away plundering and killing. We were also surprised to learn that Viking women had rights compared to many other cultures. They could divorce a man if they liked and keep their own name too. They passed on all their homely skills to the girls in the family, while also teaching them how to use a weapon just in case the situation should arise.

The kids were happy to read that Viking children didn’t go to school and they liked the sound of the kid’s games such as ice skating. On the down side, they didn’t like the sound of some of the food the Vikings ate such as Polar Bear and Walrus. Almost everything to do with the Vikings is covered in the book including their laws, customs, gods, crime and punishment.

Vicious Vikings is a great read for all the family with plenty of tongue in cheek facts to make the kids laugh out loud along with plenty of gore and blood thirsty detail. There is the usual test your teacher section which is always popular with our kids plus quizzes and games to test how much information the children have digested. All the family had lots of fun reading Vicious Vikings and to sum it up in two words to quote our kids “It’s Awesome!”.