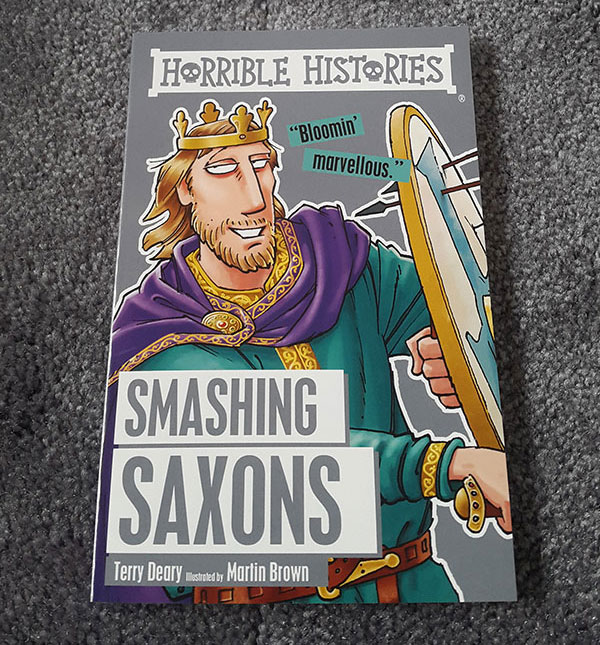 Read all the foul facts of how the Saxons went from ruthless invaders and rulers to peasants under Norman rule in Horrible Histories Smashing Saxons.

Laughs and Gore in Abundance

The first good chortle in Smashing Saxons is the diary of Vortigern or at least what the Horrible Histories writers imagined Vortigern would have written to describe how he capitulated to the Saxons. We like the way the writers turn facts into amusing anecdotes in this way and the kids enjoyed it too!

The Saxons were a superstitious lot with some of their customs having tragic consequences for their servants. Take for instance how they would bury a servant with his master. The poor chap was shoved down the hole on top of the corpse and buried alive so they could serve their master in the afterlife. How terribly gruesome! Things didn’t improve much on that front either after St Augustine brought Christianity to the Saxons. Saxons would cut off the heads of their dead relatives so they couldn’t come back to haunt them or burn their crops to ward away vampires and ghosts. 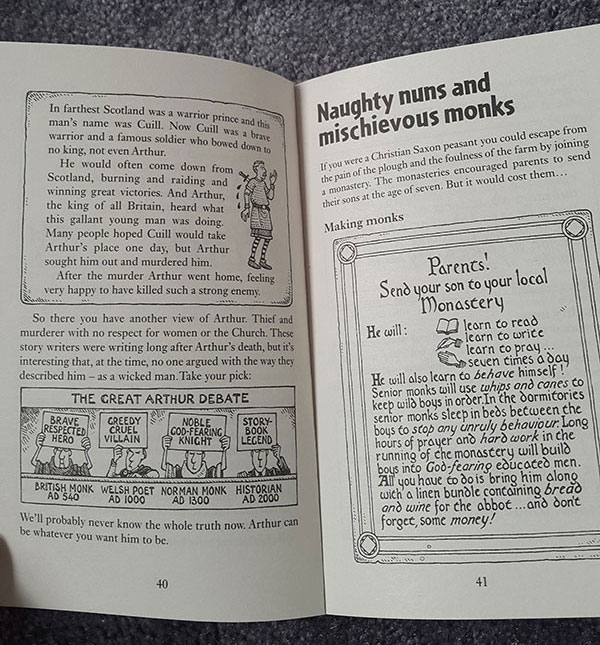 When it came to signs, the Saxons were very superstitious. Our kids laughed at some of their beliefs that included

Horrible Histories books are all about realism and facts therefore it is hardly surprising that the legend of King Arthur is well and truly put to bed as a tale of fiction. Our kids were a little sad that the knights of the round table and all that are simply a thing of legend but the book does cover some facts that may be true about Arthur like what an awful person he was! He was a thief, murderer and hater of women! Or was he?

The book covers the life of King Alfred the Great who actually did exist and after years of fighting the Vikings persuaded the Viking leader Guthrum to convert to Christianity. The story of the burning of the cakes is however made up to make Alfred look even greater than he was!

Smashing Saxons leaves nothing to the imagination when it comes to describing how the monks and nuns of the time behaved. We always think these “holy” people would be the sort we would admire but Horrible Histories sets the record straight good and proper. Some nuns were far from modest, would wear bright colours, curl their hair and generally preen themselves a lot. Some monks were married and had their families living in the monasteries with them but the life of a monk or nun was not always so great as the book tells us in gruesome detail.

Our son always prefers reading about how the ordinary folk lived in those days and wonders how they survived without the luxuries we enjoy today. No X Box for Saxon children typical games or entertainment included pony clubbing where two ponies were encouraged to fight and the loser was the dead pony! Or bull baiting which was another pastime. The poor old bull was tied to a stake