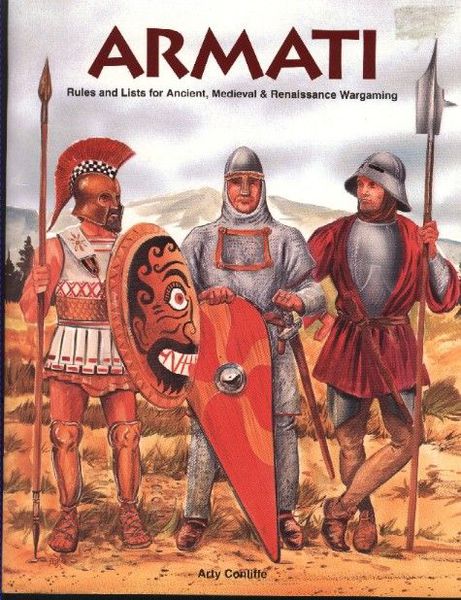 Simple, effective, and clearly written: these descriptions could refer to any one of the most popular wargaming miniatures board game rules. No one game can claim to be so fitting of this description however, than the Ancient-Medieval-Renaissance rule-set masterpiece that is Armati. Its first edition is still to this day one of the most concisely written and well-presented rule sets on the market. As those who have played Armati will know, its rules are set up to reward those who put time and effort into their initial deployment forces, with punishment for those who shirk such responsibilities early in the game. This sort of tactical realism is typical of Armati and shines through in most aspects of its rule set.

The Armati rules, laid out/authored by Arty Confliffe (of Crossfire wargaming fame) are set up as such that they should make players of all levels of experience feel right at home. Presented clearly enough to be understood by all beginners yet complex enough in their execution as to entertain even the most seasoned of board-game veterans, the familiar mechanics facilitate nothing but the most entertaining and realistic of battle scenarios that a 2 to 3-hour game span can hope to achieve.

The army configurations are fairly standard in their divisions, with the expected classes such as knights, cavalry, and so on being present. One of the defining moments of your campaign will be this initial setup however: if your forces are too spread out then you can expect to be picked off quite easily, though too heavy a grouping and you’re going to find it very difficult to manoeuvre. This is precisely why, as mentioned in the paragraphs above, it is very important to make the tough setup decision early in the game rather than on an ad-hoc basis later on when things are starting to truly kick off.

Following your initial grouping of forces and general setup, there are the game’s phases to consider. These consist of an initiative phase, followed by a missile phase, a movement phases, a combat phase, and rally phase. Again, all these phases are simple and clearly defined, with each being quite easy to understand as well. The initiative phase requires the roll of a dice to determine which side effectively goes first. The missile phase involves shooting nearby enemies of course.

It is the movement phase that is one of the most complex due to the values of your units. Your heavy units, for example, can only move a distance of 2 inches whilst are able to move a little further. This creates a style of gameplay where tactics are a necessity and, as has been said before, your initial grouping/arrangement of units is vitally important. Initial setup determines the way you move on each turn after all, and the way you move will determine how successful you are in your attacks and/or evasion of said attacks. The combat phase is also straightforward, and the rally phase is short and requires simple rolling of dice.

In effect, Armati Is quite simply the best-written and arguably the best overall ruleset that covers the Ancient, Medieval, and Renaissance. Well-written enough to comfortably draw in beginners yet with enough complexity in its execution to entertain hardcore wargaming fans, this 2 to 3 hour game relies heavily on clever tactics in your initial formation as well as paying close attention to your movement on the battle board. The result is a game that is really difficult to fault, striking a balance between enjoyable complexity and accessibility.