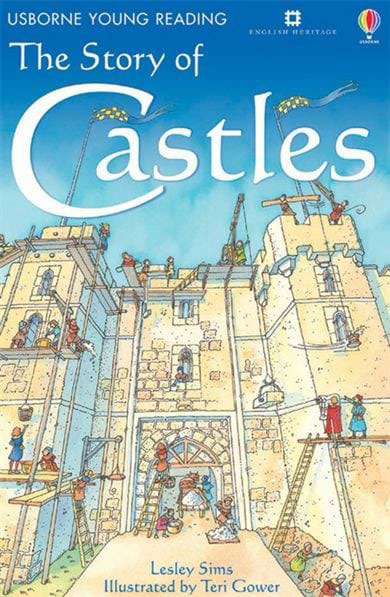 A Bit About the Book

You may have come across this book as a suggested read based on a purchase of other books in her collection, many of which are more geared towards fictional subjects, with titles such as Lizard in a Blizzard, Weasels with Measles, and Seal at the Wheel. Rest assured, however, The Story of Castles is strictly non-fiction work whose self-stated purpose is to provide some of the basics of castle structures. Specifically, it promises to answer the question of “why did people need castles?”, as well as assuring the reader that we will read about what it is like to live in a castle, and why they eventual fell out of favour/went out of fashion.

Firstly, this book is by no means intended to be in the same pool of literature as the richly-detailed Castle by David Macauley. In contrast to this incredibly rich and detailed journey through the history of castles, The Story of Castles is a 63-page toe-in-the-water equivalent on the subject. The book’s colourful illustrations and large, sporadically-placed text is a giveaway when it comes to the level of detail that is to be expected from the book.

This comparatively shallow depth of detail doesn’t mean that this book doesn’t fit snugly into the “useful” category when it comes to primary and even secondary-level school students’ education, however. On the contrary, the concise and simple style of this book can be beneficial for those completely new to the subject of castles. Instead of having to dive into heavy textbooks, it can be extremely useful for children to build a timeline and framework of the subject in their mind before then delving deeper into the more detailed aspects of the material. Therefore, I will argue that Lesley Sim’s book is a triumph here in what it sets out to do. So, what’s going on between the covers, specifically?

So, how useful is this book for your primary-school or secondary student in their historical endeavours? A look at the contents of the book will allow you to form a light framework of the book’s contents. Its first chapter begins with the very beginnings of castles, looking very briefly at the origins of these structures, from the invasion of Europe by “raiders” to the agreement of rich lords to protect villagers from these attackers in return for their land. The second chapter goes on to detail how castles became to be made primarily of stone, the development of their designs over time, and the inner workings of the castles themselves, including how various people (including the rich lord) inside the castles lived.

By the time the third chapter rolls along, the book has moved on to the details regarding the various designs outside and within these structures designed to both delay and damage attackers (this chapter will most likely have a stronger appeal because it tackles some of the more well-known aspects of castles like their moats, the drawbridge, and more gruesome defences like pouring stones on the enemy and why pouring hot oil on the enemy is a common misconception).

Chapter 3 explores new castle designs and ingenious that knights fighting abroad had observed in their time away. This is the period that involved multi-walled castles being built, with small village-like enclaves developing with the walls.

Chapter 5 is another chapter that children will likely find particularly exciting, since it deals with the subject of castle attacks and battles, detailing some of the inventions (like the trebuchet) designed to penetrate castle walls, and detailing various techniques like surrounding, burrowing/tunnelling, surprise attacks, and also the feasts that took place when one side overcame the other, or when the defenders managed to fend off the attackers. This chapter is the longest in the book, at 15 pages long, and goes into a reasonable amount of detail about the various techniques used by attackers and the specifics of what goes on during the mighty feasts inside the walls.

Finally, we are treated to a short 3-page section that tackles the demise of castles. The invention of the cannon spelled not only physical demise for even the mightiest castle walls, but this invention had more far-reaching consequences. As a result of no longer being the titans of defence they once were, castles then were utilised less over time, eventually being vacated in favour of grand manors, as well as the alliance of many once-warring factions in order to fight wars abroad.

Too Brief for Some, but A Great Starter

As you can gather from the brief tour of the book’s chapters, you’re not going to encounter any kind of serious detail within this book’s chapters. As an example, there is a lack of reference to the influence of the Norman invasion, their pioneering of (initially wooden) castle structures, and their overall impact and legacy of the castle as a concept and as a structure. It is this lack of detail in favour of light-hearted summaries, sometimes of entire periods of history, that will render this book much less useful for advanced secondary-school students.

Primary school students and perhaps early secondary-level students will benefit from the content of this book, however. Secondary students would be most likely to pass over this book due to the large font and large amount of illustration throughout. However, if they were to use this book as a springboard to spark their curiosity in some of the finer aspects of castle life, then this text could certainly be considered useful. It certainly contains chapters likely to pique even the most cynical child’s interest; the chapter detailing the castle defences/offensive options, as well as the chapter on the attacking of castles – http://blog.english-heritage.org.uk/5-sieges-from-englands-past/ and the eventual celebratory feasts are more likely than others to do stoke some interest.

The most relevant audience for this book would be primary students. This is because the writing style is extremely simplistic, though this isn’t entirely a negative. The author’s simple writing style, as well as the book’s colourful illustrations, certainly make this a more accessible and relevant text for primary-school students. While secondary students will likely recognise the lack of detail in some of the subjects within the book, primary students are more likely to find the knowledge contained within this book enough for their level of study. There are jokes and humorous observations dotted throughout the book, too, though not quite on the level of self-awareness that you would find in the Horrible Histories books, for example.

The shallow depth of the subject exploration in this book aside, the main drawback of the text would be the noticeably “vanilla” writing style. It is neither uninteresting nor does it display the kind of flare and individuality that Terry Deary injects into the Horrible Histories books – http://www.horrible-histories.co.uk/beastly-bookshop he has authored. Don’t write off this text altogether, though. Its simplicity and therefore high level of accessibility for primary students, make it a useful foundation text. This book which you get direct at usborne.com should primarily be used as a starting point for primary, and also some early secondary students, in order to pique interest in the various aspects of castle history found here https://www.historic-uk.com/HistoryMagazine/DestinationsUK/History-of-Castles/ – this initial reading could very well lead to an inflaming of interest in the subject, at which point a more detailed textbook should be sought out in order to provide more in-depth coverage of the various aspects of castle history and life.