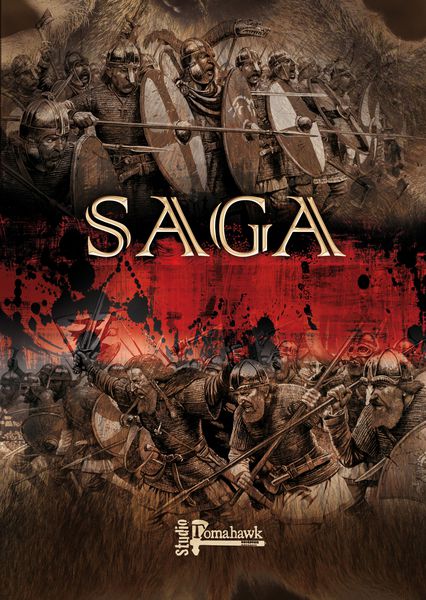 There’s a certain charm about Saga’s playing surface, a 4 x 3 game board designed with said dimensions in order to fit perfectly on the kitchen table of the game’s creator, Alexandre Buchel. Saga is a warfare miniatures rule set that resulted from a joint venture between Gripping Beast and Studio Tomahawk. Though it was published back in 2011, it remains even today one of the best warfare board games set in the Dark Ages.

At 74 pages in length, Saga isn’t exactly the heaviest rule book you’ll find in the miniatures world (Ancient & Medieval Wargaming has a staggering 288 pages by comparison), though you wouldn’t hold this fact against its creators: it’s still a fantastic board game with a highly accessible combat system.

The general framework consists of each player controlling a warband that consists of multiple units (one unit is a collection of anywhere between 4 and 12 miniatures). An entire warband therefore consists of between 25 and 73 miniatures in total. You can station models on the board either individually or as units, with the latter requiring more intensive calculation of casualties in the aftermath of your battles. Saga has a 4-class system that consists of a Warlord, Heathguard, Warriors, and Peasants/Levies. Two characteristics in turn apply to each class: movement and armour.

There is a measuring element to the gameplay as well, which can be achieved by either measuring exact distances or utilising measuring sticks ranging from VS (very short) to L (long). Distances dictate a significant part of the mechanics here. As you can see, this game can become quite complex, and this element of the game is less than ideal for casual or quick play.

Studio Tomahawk and Gripping Beast have designed the game so that the combat mechanics are relatively simple. Combat is based on dice throws and consists of four actions: move, shoot, melee, and rest. You also assume the role of one of four factions, which are the Normans, Welsh, Vikings, and Anglo-Saxons.

One thing that must be said about the mechanics (the finer points of which are too intricate to into here) is that they are relatively simple (again, compared to the complex beast that is Ancient & Medieval Wargaming). Saga can however be criticised for the very simplicity that makes it accessible to newcomers in the first place. Notice the lack of morale mechanics here, which can lead to battles becoming much bloodier and therefore less realistic than some purists out there would like. Combat simplicity may also leave experience war gamers feeling like there’s a lack of depth here as well, though this really is what the game’s authors were going for so it’s difficult to criticise them for balancing depth with accessibility and ease of play.

The fact remains that Saga is one of the more well thought out and enjoyable medieval period games to play. The turn-based mechanics and dice- based combat/action systems are both familiar, yet the introduction of unique classes, factions, special abilities, and other variables serve to synergise in order to create a game more complex than its individual parts would lead you think.